As part of my job, I’m very lucky that I can go and interview authors and people of note. So when I was put onto contacting and reading The Many by Wyl Menmuir, I was not only excited to have some new reading material, but intrigued that this small publication (independently pushed and just over 130 pages long) has been long-listed for the prestigious Man Booker Prize.

So I picked up a copy from my local bookshop, and set about reading. It took me just over an hour to devour it, and I’m pleased to say I was hooked. The Many is worthy of the nomination, as the story is brilliantly woven, expertly told and with different voices and with a satisfying ending that will both leave questions unsolved, yet the reader entirely sated. 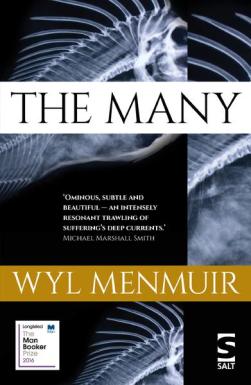 Set in an unnamed fishing community on the North Cornish coast, the novel focuses around a new arrival to a very close-knit and closeted community. On paper, Timothy Bucchanan’s move from London to the village makes perfect sense. However, the narrative dives into a world that is completely isolated, mysterious and unfriendly to newcomers. With the ghost of a man that still holds sway over the locals, wasted fish being hauled from a contaminated sea, and unsettling dreams, Timothy soon gets swept up in village life, and with thousands of questions going unanswered, Timothy decides secrets must be unveiled, and the past has to be dug up.

The Many is rare in how it spans and encapulates different literary genres. With biological warfare and contaminated seas signalling science fiction, a world that is cut off and completely isolated being something out of dystopian literature, a murder mystery that has yet to be solved, and a touch of fantasy blending alongside magical realism, this novel feels a lot bigger than it physically is. Menmuir has given the readers enough of the characters to be interested by them, but not bog them down with unneccessary backstories. The figure of Perran, a character who died years before the narrative is set, is like a ghostly figure over the village, and his influence and story is hidden within plain sight. He is never properly physically described, nor do we properly hear him speak (apart from within flashback sequences) yet despite being dead, he is so present within the village conscious.

Timothy arrives at this village with his own issues. He has hopes and dreams of settling down and moving his wife away from the London rat-race, and in touching passages he can imagine himself through different social scenerios. However, this doesn’t happen. And Timothy is left constantly on the outside, yet being the most talked about man in the village.

The village dynamic is also very well written about. As I live on the Cornish coast, I know that there can be some animosity towards newcomers, yet this village certainly runs with it, and brings a Wickerman-esque feel to the narrative.

The novel has some interesting dream sequences, and moments of surrealism/magical realism, which reminds me of the writing styles of Alan Garner and Gabriel García Márquez. These sequences do have to be taken a face value, and towards the end of the novel, the world of the village and probably even Timothy’s own mental state does get a bit fractured, which just adds to the dynamic of the novel.

All in all, a great piece of literature. I’d thoroughly recommend it if you want to try a good read that will stick with you, yet isn’t too physically big.

The Many is out now!