When I started blogging, I did make a rule that I would never review any of J.K Rowling’s books – only due to the fact that I wasn’t sure if I could write a book review that would be fair to the book and not reflect the author. But, as I did a recent reread of the novel, I feel that I have enough to say about this book without really mentioning the author.

Set in the West Country village of Pagford (think Sandford in Hot Fuzz and the idea of the pastoral/Golden England image), the death of local councillor Barry Fairbrother completely shocks the closeted community, and subsequently leaves an empty gap on the local parish council – a spot which not only holds massive personal significance to the ‘Old Guard’ of the village, but could influence how the village and the neighbouring boroughs are run. And within these boroughs, the council estate of ‘The Fields’ and the Bellchapel Methadone Rehabilitation Clinic is a long-standing, sore spot for the inhabitants of Pagford. The ‘Casual Vacancy’ of the council seat is the set up for one of the biggest civil wars that the village has ever had to deal with. And inbetween the midst of interwoven story lines of poverty, teenage drama, salacious gossip and drug and death, this battleground threatens to break the fragile bliss that hangs over the community/. 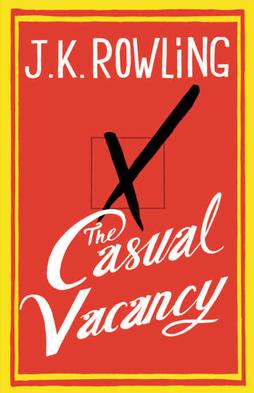 t must be addressed is that, despite the author, this is not a Potter-related story in the slightest. When Rowling first of all announced the book, there was surprise over how different the genre and world was away from Hogwarts and all its magical glory. But, this book holds its own against Potter.

Now, I must be brutally honest. If, beforehand, I spotted this book in Waterstones at it hadn’t been written by Rowling, I may have not picked it up. I grew up with Harry Potter, and that woman impacted my life in more ways than one. However, after reading this novel, I have been introduced to a whole new genre of literature that I just want to devour. And, this has nothing to do with the author, but with the content itself.

This novel deals with very adult themes that do affect everyday people in an everyday life, and despite it having the center story arc of an empty parish seat and a land dispute, this novel is gripping from page one to page five-hundred-and-three.

The initial idea that everybody-knows-everything-in-a-small-village isn’t too dissimilar to my own village, and I was surprised to being able to relate some many issues that she writes about. Rowling, after living in Chepstow in her youth, clearly knows what it’s like to have such an intimate community, and has brought her own experiences of quirks that smaller towns and villages have, such as particular attitudes to outsiders, and the characters in general.

Each character is so well-developed, and intriguing to the plot that there is not weak link in the village structure. And she has done the rare thing of making truly villainous characters so hateful that you cannot find any glimmer of positivity, and she has made the upstanding, thoughtful characters lovely and more-ish. But she’s also written the others in a way that they are flawed, and human-like, so that you can understand when they make mistakes, and have personalities that you can draw upon your own.

As a Potter fan, the way that Rowling writes has clearly developed over the years. There is a massive difference between the Philosopher’s Stone, and the Deathly Hallows. And the writing didn’t shock me, but it did surprise me. he way it’s written didn’t shock me so much at first, but it did surprise me.With frank discussions about sex, death, drugs and swearing, Rowling writes in a realistic way to the genre and the adult category of the book, yet I was guilty to rearing back after reading a particularly graphic bit of swearing and thinking that this was the same woman who created Harry, Ron and Hermione. And, unfortunately, if you constantly think about the comparison between Potter and Casual Vacancy, you can never properly enjoy the book, and it may be what has put people off reading it.

However, all in all, The Casual Vacancy is truly a gripping narrative which sucks you right into the bustling world of Pagford and the constant underlying tension until the very end, and I would recommend to any age from teenager upwards. But, with the plot differing to Potter, and more adult themes that can shock unsurprising readers, it will be for a more mature audience that Rowling does attract.

There was also a three-part BBC series of The Casual Vacancy that aired earlier this year, and despite this not following the plot entirely, and having to be changed to adapt for television, I would recommend it for character choice, and quality of the acting and sets. But, read the book first. As the ending of the book is completely different to the series, and in my opinion, far more harrowing.

If you, as a reader, enjoyed:

Then you’ll love this book!

Trailer for the BBC series

Note – have begun the transferal of all my old blogposts on my now-defunct blog onto this one. This blog will house everything I’ve published before, but in a sleeker and more professional way.

Thank you for reading this review.